Like when you’re scheduled for a C-section on Thursday, October 28th, but you get a wicked stomach flu that morning instead of a baby.

Or when you’re absolutely positive that you’re pregnant with a girl, but you find out you’re… not.

Or when you spend a small fortune on tickets to go see the How to Train Your Dragon Live Spectacular and your kid – the older one that’s never been afraid of anything in her whole life – is terrified of the “real fire” and makes you leave the arena where a kind usher takes pity on you and walks you into a luxury suite with the other nervous kids where there is virtually no sound and definitely no heat from the scary real fire.

The Loud One was SO EXCITED for this show. We told her and The Nibbit about it earlier in the week so that they could enjoy the anticipation of it for a few days… and they did. They counted down the days, talked about it at school and asked a LOT of questions.

We got to the Izod Center (aka the Brendan Byrne Arena if you’re as old as I am) early… like before the parking attendants early… and killed some time by watching TV and eating Goldfish in the car. (Can you believe they don’t allow tailgating at this kind of event? KJ was bummed.)

Then, we lined up: 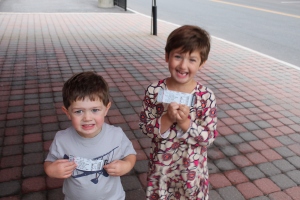 Once we went in, we did THIS: 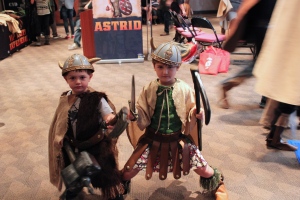 The Nibbit will never get over someone telling him to “…walk over to that table and choose your weapon.”

And then we met Hiccup and Astrid (the main characters) and LO and The Nibbit became Honorary Dragon Trainers. (I’m keeping the certificates in case they’re the only diplomas they ever earn.) 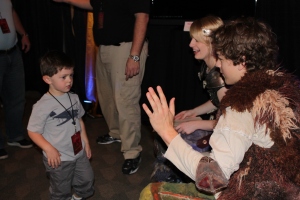 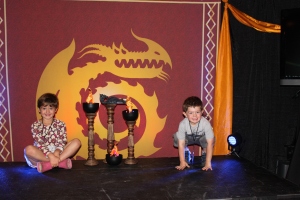 Finally, it was time for the show.

Well, about three seconds in, something like this happened: 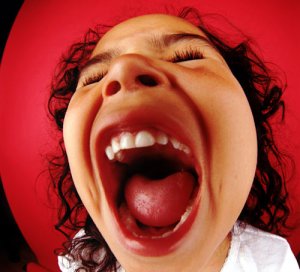 This is actually not The Loud One, but it could have been.

My first thought was that she was joking. This is the kid that has NEVER been scared or nervous during any movie or television show EVER. She has never run out of the room to hide under the table when Ursula comes on during The Little Mermaid. She doesn’t cover her eyes when Bruce the Shark is chasing Merlin and Dori in Finding Nemo. And most importantly, she has never as much as covered her eyes during the movie version of Dragon.

But as she said, “That’s REAL fire! And you’re not supposed to have real fire INSIDE!!”

She had a point.

We left. And as I said, a very nice usher took pity on us and redirected us to a luxury box, where we enjoyed (and I use that term sarcastically) the rest of the two hour show in a dark room that was enclosed with a glass window and filled with chatty, relieved kids who were thrilled to no longer be subjected to up-close-and-personal real fire and intense dragon stuff. (And also, their equally chatty parents. AWESOME.)

So. Is it wrong that my first reaction to the whole thing was to be really annoyed? Like really bothered that KJ and I went through all of this trouble and THIS happened?

She was scared. My kid was terrified of the real fire and in that moment, she didn’t really care that we wouldn’t all get to sit together. (And she definitely wasn’t worried about how much the ticket cost!)

A better mother wouldn’t have registered any annoyance. Obvs, I am NOT that better mother. YET. I’m working on it.

Sometimes I forget that having young kids means expecting the unexpected. Or at least not being irrationally annoyed when the unexpected happens.

Sometimes kids don’t react the way we predict they will – or want them to. (I mean, how many times has your kid said, “Really Mom, I just can’t believe I was so lucky to land YOU as a parent. You’re so awesome and you do so much cool stuff for me… I’m really grateful. I’m not going to whine at all today. And I’m going to sleep 12 hours straight.”)

Please note: If your kid really has ever said this to you, I do NOT want to know about it. That was a rhetorical question. Keep it to yourself.

Sometimes kids don’t love things we expect them to love. Other times, they get unpredictably crazy-excited about small stuff.

Sometimes, we give our kids big gifts and they just want the box. 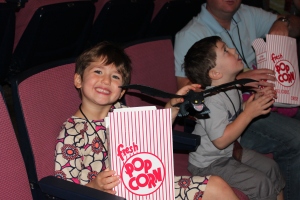 This was taken right before the show started. She had just announced to everyone in earshot, “This is going to be the BEST DAY OF MY LIFE.” Ten minutes later, those seats were empty. But if you ask her about it now, she’ll tell you that she had the best time ever. Kids are funny.