Today was a crazy day. There were so many things. Like big things. Like big first things. Things that were momentous for my kids but really, way more for me. And one of those big things brought up a big parenting question for me, but we’ll get to that. And I know you’re all “what the eff is she talking about?” right now, so I’ll try to get on with it.

The first big first thing was this:

I was simply not sure how this day would go. And I was unwilling to guess because in the past, I’ve always been wrong. As the Loud One is my most emotional kid, I always expected her to have a hard time separating and she never did. When The Nibbit started school, I thought it would be Easy Breezy for him and… um, not so much. In fact, he was still having a bad day here and there right up until the end of last year. (I blame it on all the violence in The Wild Kratz… really, what else would cause him to act out like that?)

So we went to preschool today not knowing what to expect. We brought The Nibbit to his classroom first. He was excited to see his friends and teachers. He tackled one of them. Physical Aggression: Check! He dove right in and when I asked for a kiss goodbye, this happened:

Then we went to Happy Dude’s classroom and he was barely in the door when his magical teacher got down to his level and shared some truck magnets with him. Well, she had him at “truck.”

He never looked back, and when I went to pick him up, he barely seemed to notice that I had been gone. “And you are…. ?”

Of course, I’m not getting too cocky… I know that the whole thing is not a done deal. The novelty of school will wear off for The Nibbit and Happy Dude may not be as easy to distract next time, especially now that he knows I leave.

But it was a nice first thing.

The second first thing was this: 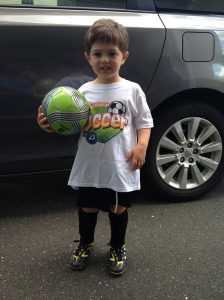 The Nibbit’s first day of soccer

This kid loves playing soccer at home and has been EAGERLY awaiting his turn to play. He was VERY excited about the cleats (and presumably the damage they would do to anything he stepped on while wearing them) and the rest of the gear.

He counted down the days and it was finally time! We got to the field a few minutes early so he ran out to the field with some of the other kids and started kicking his ball around! This was awesome! (… especially because it was SO not the experience I had with The Loud One.)

Side note: A few years ago, LO told me that she wanted to play soccer. She REALLY wanted to play soccer. PLEEEEAAASSSSE would I let her play soccer?? Despite my misgivings – and I had a few – I gave in and signed her up. We got as far as the sideline. Then, she cried. And whined. And moaned. About the heat. About the cleats. About the shorts. About LIFE IN GENERAL which had treated her so unfairly… by bringing her to a soccer field!! Can you believe the audacity?

But noooo, not my Nibbit! He was out there, doing his thing! I was all set for a quiet hour on the sidelines with my iPad. Right? If I could double-all caps this next word, I would –> WRONG.

The coaches called all the players into a huddle where they presumably said something like, “Hi. We’re your coaches. This is going to be fun. We’re going to learn how to play soccer.”

Well. The Nibbit comes running across the field towards me, full-sprint, SOBBING. “I don’t want to play this game! I don’t like soccer! I want to go home!”

COME. ON. Are you kidding me?

But. But. But. There was such promise! You love those cleats!

Nope. He calmed down enough to tell me that the coaches mentioned something about a tag-like game and he does NOT like tag and he does NOT want to play and he just wants to sit with me. So we sat. We watched. We had this type of ongoing dialogue:

Then, on the way home, THIS happened: 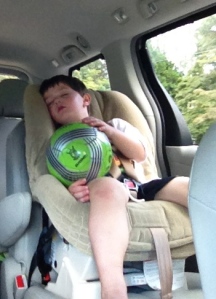 So, all of this brings me to my now-very-predictable parenting question.

She’s back in the saddle!

The Loud One started horseback riding lessons when she was 3 ½ . She took them on-and-off for about eight months, during which her sensory issues got worse and we started having weekly battles about her wearing the required pants, boots and helmet. I couldn’t handle the tantrums every week for something that was voluntary and more importantly, supposed to be fun so I told her that she needed to take a break until she could get her shit together. (Oh relax, I did not say those words to her. I said, “… until you get your SHITE together.” Better?)

Over the years, she brought up riding again once in a while, but only recently really started to push about trying again. I told her the required gear was the same. And she said she would be OK with it.

And GUESS WHAT… she was! Look at that picture again! My girl’s wearing a helmet, boots and PANTS, people. PANTS! Do you know how huge this is?

I was so proud of her up on that horse. Of course, I have no idea how long this will last but for today, she wore PANTS! Oh yeah, and rode a horse!

OK, so back to my question. And I am not kidding about this… I want input. So hit the damn “Leave a comment” button and tell me how to parent my kid. (And when I say “me,” I really mean “us.” KJ totally wants your help, too.)

The question is, what do we do about The Nibbit and soccer?

Obviously, I am hoping that next week is a whole different story and he has a great time. He was obviously tired today and the whole first day of school was draining and blah blah blah. But let’s be realistic, it’s way more likely that he is now soured on the sport and will not want to go. Ever.

Assume we go back next week and he is still not interested. What would YOU do? Would you force your kid to go week after week and try to play? Or just sit there and watch? Do you give in and let him/her QUIT? What kind of lesson is that? Does it matter what kind of lesson that is? What about the money? We can’t get a refund for this, so should THAT be a factor in the decision?

This is not the first time this has happened in our family and I’m never completely satisfied with the way we handle these things. I know he’s only 3½ so I’m not trying to make this a bigger deal than it should be, but you know me, I never miss an opportunity to completely screw up my kids!

So here’s your chance to shine, Parenting Gurus… let him quit or force him to go? START SHINING.