So, I really screwed up this time.

I know I tell you about my parenting mistakes all the time…  about how I yelled at my kids and called them brats. Or about how I took away “reading time” as a punishment. The sugar cereal for dinner… the screen time… the impatience… all of that. But this time, it’s a doozy.

Two days ago, I gave my kids’ peanut butter cookies. This wouldn’t sound like such a big deal except that two of my kids are allergic to peanuts.

They are both fine and we didn’t need to use the Epi-Pen, but I cannot stop thinking about the whole thing, because well, WTF? Who does that??

I bought the cookies from the bakery section of Whole Foods. They looked very much like chocolate chip cookies and I never checked the label because it was on the bottom of the package.

Wait, that sounds like the World’s Lamest Excuse for almost poisoning my kids  – the label was on the bottom – ugh. I didn’t check the label because I have gotten lazy and complacent about these allergies and to be honest, I just didn’t think of it.

Now, if the label had been on the top, I probably would have noticed he words PNUT BTR CHOC CHUNK COOKIES, but since the label was on the bottom, I didn’t. 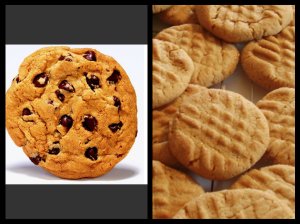 We had friends over and all the kids were sitting around the table, excited for dessert (which in case you haven’t been reading carefully, was PEANUT BUTTER COOKIES.) As soon as The Loud One took a tiny bite, she said, “my tongue feels weird.” I spun around and told her to stop eating it; looked at the Nibbit, who also had a bite in his mouth, and yelled at him, “Spit it out!”

Side note: Isn’t the human body amazing? That tiny bite had barely hit her tongue before rejecting it. CRAZY.

I grabbed the Benadryl, poured a dose for the Nibbit, gave him the cup and then pushed the bottle at the Loud One and told her to “CHUG THIS (words I have never pictured saying to my daughter)!”

Then we waited. I’m so thankful that my friend was there – she was the perfect combination of calm and reassuring (AND it bears mentioning that her three kids were real troopers about having their desserts RIPPED out of their hands) and while I may have appeared to keep my shit together, I thought my heart was going to beat right out of my chest.

We stared at the LO and the Nibbit for the next few minutes… talking to them about how they felt and monitoring their speech for signs of anaphylaxis. They continued to say that their tongues felt itchy and weird, but never showed any signs of swelling or labored breathing. The Nibbit broke out with hives all over his face, but after a few minutes, the Benadryl kicked in and they seemed to feel better.

I let them watch TV for the next hour while I stared at them and annoyed them by asking “How do you feel now?” every two minutes. Aside from being really pissed about their cookies being taken away, they were OK.

KJ came home in the middle of the whole scene and to his credit, he was nothing but supportive. He even took it upon himself to test the cookies himself to confirm that yes, these were definitely PEANUT BUTTER COOKIES. Whatta guy.

At that point, the Loud One started complaining that her stomach hurt. Huh. She hadn’t really stopped complaining about the fact that she was still hungry because she never got dessert (the HORROR), so I wasn’t sure if her stomach REALLY hurt or if she was just being whiney.

I brought the Nibbit up to bed and then came back down to read to LO. We were 28 seconds into our book when I heard “Mama? I NEED YOU!” and then the oh-so-distinctive sound of vomit splashing all over his bedroom carpet.

Guess it serves me right for doubting the LO’s stomachache.

The next hour was a blur of vomit, clean-up, and trying to get the now-exhausted kids to sleep. The LO never threw up but she also never stopped crying about how she was wronged (ya know, no dessert). She finagled that injustice into an opportunity to sleep in our bed, but at that point, I felt so guilty, I would have given her a pony… or Squeaky and Pip back.

Then Happy Dude decided to get in on the fun by complaining about how HIS throat was really hurting and how he needed to have “a wot of water” to make it better.

So, at this point, most of you are probably thinking, WTF? How could you not check the label? Why didn’t you rush them to the doctor’s office or the ER? HOW COULD YOU GIVE YOUR KIDS PEANUT BUTTER COOKIES??

Yet, if I were telling you this story in person, you’d probably say what I heard from a handful of people yesterday:

We all make mistakes.

Don’t beat yourself up.

Those people are all very kind. And of course that’s what I would say to someone else as well.

I’m pretty sure I deserve to beat myself up just a little bit. Maybe like a small black eye and a split lip?

My kids have nut allergies. I didn’t give them something that was cooked in peanut oil… that “could happen.” I didn’t even give them cookies that “may contain trace amounts of peanuts;” that would be more understandable. I gave them PEANUT BUTTER COOKIES. Short of scooping out a bunch of Planter’s nuts and stuffing them in their mouths, this was pretty much the worst thing I could do.

And for my next trick, PB&J for dinner!

Needless to say, I have learned my lesson.

I have thanked God it all turned out to be fine. I told KJ that I appreciate his being supportive and not angry. (He did call me yesterday morning to ask, “Have you tried to kill our kids yet today?” but other than that, he doesn’t seem overly concerned about leaving the kids in my care.)

And most importantly, I apologized to the Nibbit and the Loud One. I told them that I made a terrible mistake and that I am so so so sorry they were sick because of it.

The LO said she could forgive me for giving her peanut butter cookies (but not necessarily for taking them away).

And the Nibbit said, “It’s OK. I make a mistake sometimes, too.”

PS. Three of my closest friends had crappy stuff happen this week as well, including, but not limited to, 25 stitches on a three-year old’s head, a 9-1-1 call and hospital stay for a Mom, and a swallowed nickel which remains firmly lodged in his small intestine. While commiserating about how life sometimes sucks, my friend dubbed us “The Sisterhood of the Traveling Shitty Karma.” Perfect.

If these posts were Seniors, they’d be voted Most Popular…