So, I would just like the record to show that I have NEVER been a big Lance Armstrong fan. Anyone that dates Sheryl Crow seriously and doesn’t convince her to stop writing those cheesy songs is not OK in my book. (I’ll make an exception for Eric Clapton because he’s a bad ass. He probably ran in the other direction when he heard, “Iiiii’m gonna soak up the suuuuun.”)

Lance Armstrong also just seems like kind of a douchebag. 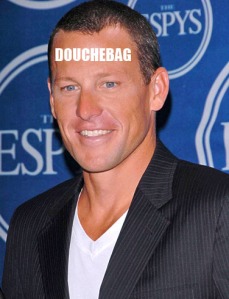 Of course, I respect the Livestrong organization and everything it does for cancer research and providing services, but in some ways, that too feels like another extension of his over-inflated ego. “Look at me! I can ride a bike AND cure cancer!”

Needless to say, I feel vindicated. What a jackass. I didn’t even really understand what doping was until my friend Wiki told me and YIKES! That’s some hardcore cheating.

But I also feel bad because I’m sure there were a handful of little miniature cyclists all over the world that idolized Armstrong. They probably thought he was a god on wheels and aspired to be just like him.

And now, those poor Moms have to explain to their little people that sometimes these people who we admire f*** up. (Hopefully they’re a little more articulate than I am.)

The whole thing reminds me of how wary I am of my kids looking up to people like this as “role models.”

I actually started thinking about this during the summer when we were watching the Olympics. The Loud One would watch the highlights in awe and say something like “I’m going to be a gymnast/swimmer/bow-and-arrow-shooter when I grow up.”

Once we explained to her that she would have to start learning how to be a gymnast/swimmer/bow-and-arrow-shooter pretty much immediately and then practice every single day and probably not have as much time for playing with stuffed puppies and watching How to Train Your Dragon, she quickly changed her tune.

In the meantime, I started thinking about how those Olympic stars – Michael Phelps, Gabby Douglas, Kerri Walsh – have probably become role models for so many young kids. And while it’s great for our kids to respect the work ethic and determination of these athletes, I would be a little bit nervous if any of my kids started to idolize one of them in particular.

Why? Because we can put people up on a pedestal, but sometimes they fall. And that fall can be tricky to explain to a child.

The fall might be a small wobble off of the podium in which case the star can climb back on and redeem him/herself (Phelps smoking pot, maybe?) or, like in Armstrong’s case, it might be a GIANT TUMBLE, head-first into a pile of disgrace.

The same goes for musicians and actors, especially all those young, beautiful people who star on the Disney Channel shows. They work really hard and while that behavior – the work ethic, the determination – is incredibly admirable, they are human. And humans make mistakes. And in this day and age, those mistakes ALWAYS end up on YouTube.

But if my kid has the iCarly girl hanging on her wall, and iCarly screws up, then I’m the one that has to explain what “crystal meth” means.

Side note: That was a hypothetical people. As far as I know, iCarly is not a meth addict.

Look at Tiger Woods – an extreme example, for sure, but this is the exact situation I fear. Here’s a guy who was the best of the best. Kids around the world were inspired to start playing golf because of him. They watched his swing. They bought his sneakers. (They probably bought his Xbox game or something too but I don’t know anything about that stuff.)

And then he fell off the pedestal. Hard. I mean, seriously, that was a tumble of EPIC PROPORTIONS.

Another side note: He and Lance should grab a drink. Can’t you just hear that conversation?

TW: So sorry you’re going through this dude, I sort of know how you feel. Even though yours is worse.
LA: WHAT? No way dude, yours was WAY worse! You had your wife swinging golf clubs at you!
TW: Yeah, but at least I still get to play my sport. You’re not ever allowed to ride a bike again.
LA: <pause> Don’t you think Nike sucks?
TW: TOTALLY, Nike sucks BAD.

Britney Spears and her world-class meltdown is another example. How many little girls were idolizing Britney when she started hitting paparazzi with umbrellas, reportedly taking drugs, shaving her head and generally, just losing it?

So, what’s a parent to do? Encourage the idol worship and pray the objects of admiration stay on the straight and narrow? I don’t think so.

I guess if the Loud One starts obsessing about some boy band star in a few years, I will just try to remind her that “stars” are just people. And should that pretty boy land in the headlines for some unseemly behavior, I’ll explain that people have problems. Sometimes they screw up. And some screw-ups are much much much much bigger than others.(I’m talking to YOU, Chris Brown. For the record, I would NOT have given you those Grammys.)

I will try to remember to teach my kids that the people truly worthy of hero-worship don’t usually shine in the spotlight. Instead, they do important stuff like defend our country and heal the sick and feed the hungry and work to save the planet… even if no one is watching.

I will try to remember to teach my kids that fame and fortune alone are not worthy goals. Celebrity, in and of itself, is not, a quality to be admired (despite what the Kardashians would like us to think). Kindness. Compassion. Bravery. Honesty. These are the traits we should appreciate and aspire to be.

(Like I said, I will TRY to remember all of this, but I’m not making any promises because sometimes I forget to make dinner or to turn off the TV after they’ve already been watching it for three hours. So I kind of want to keep expectations in check. And plus, if that boy band dude is really cute, I may just hang the poster on MY wall.)

Will they listen? Who the hell knows? Probably not.

So in the meantime, my fingers are crossed that Taylor Swift and Derek Jeter don’t fall. 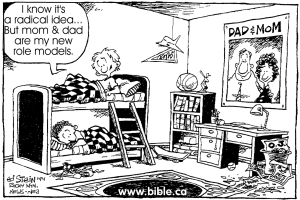 Here’s an idea! Thank you http://www.bible.ca!

If these posts were Seniors, they’d be voted Most Popular…